Extremely widespread in kitchens all over the world, rice is one of the fundamental ingredients for first courses, appetizers and side dishes of dozens and dozens of recipes. Rice is the most widespread cereal plantation in the world and is the basis of Asian cuisine (especially of China and India), but also of many European and Italian dishes, such as the various types of risotto obtained thanks to local rice specialties (Carnaroli, Vialone nano and many others).

The small and elongated rice grains are the edible part of the rice plant, known for its extreme diffusion at all latitudes and the propensity to proliferate in environments rich in water. They are collected and processed in order to eliminate their waste through a process divided into several stages: starting from drying, followed by storage, then moving on to the actual processing stages, i.e. cleaning, peeling, bleaching and polishing. Based on the degree of refining, we can speak of different types of rice: raw rice (still covered with zest residues), whole wheat, camolino rice (which has undergone a further processing phase, known as oiling) and finally the polished rice, covered with an imperceptible layer of talc or glucose.

There are several species of rice, but only two are cultivated:

The rice on the market is then further categorized into different types with respect to the size of the rice grains, each with its own cooking times:

Among the types of treated rice, parboiled must also be considered, whose processing with water vapor allows the gelation of the external part of the grain so as not to disperse the vitamins and mineral salts during cooking. 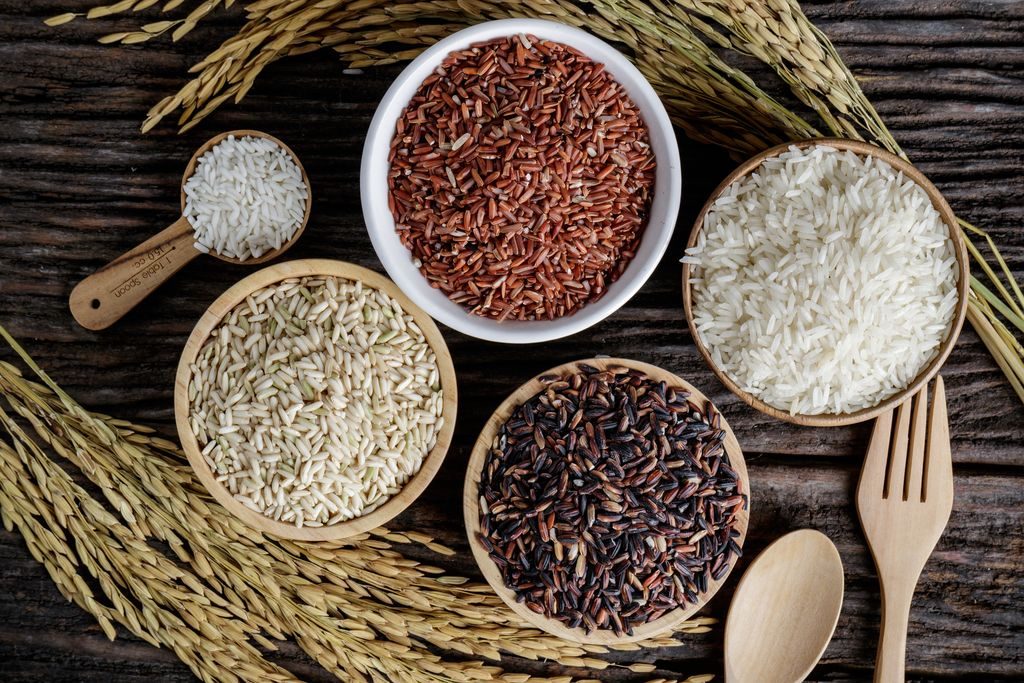 Each variety of rice is more or less suitable for different preparations, and goes best with a certain type of recipe. Here are what they are in detail!

Arborio rice: it is a superfine rice with large grains, pearly in color, capable of greatly increasing its volume during cooking. It is one of the most used varieties for preparing risotto.

Basmati rice: long and golden, it is grown in India and Pakistan and has a lower glycemic index than white rice, therefore it is preferred when following a controlled diet or when practicing bodybuilding. It does not overcook and is widely used for rice salads and cold dishes.

Carnaroli rice: with a long and pearly grain, it is the most suitable superfine rice for the preparation of risotto: it resists cooking well and goes perfectly with creamy and velvety sauces and sauces such as saffron, mushroom and tomato risotto.

Jasmine rice: this is a long grain rice of Thai origin, with a very characteristic aroma, fragrant and almost sweet. It tends to overcook easily and for this reason it is not recommended for preparing risotto, while it is the ideal variety for side dishes with fish or prawns and for enriching vegetarian or chicken curries.

Glutinous rice: known by several names (black rice, mochi rice, rice pearl, sweet rice and others), it is rich in starch and, despite the name, gluten-free. In Asia it is used for the preparation of sweets and puddings given the extreme stickiness that characterizes it.

Roma rice: is an Italian variety of rice, with large and round grains, rich in starch. It can be used as an alternative to rice for sushi, but also for risotto and pies.

Red rice: takes on the typical brown color tending to red during fermentation, and is useful for keeping the cholesterol level under control, even if its actual benefits are highly debated due to the adverse reactions it can trigger when consumed.

Venere rice: Venere rice is one of the most recent rice varieties. It was born in Italy in the late 90s and is characterized by a dark and intense color, brown tending to black. It is a whole variety, rich in fiber and with few sugars, suitable for both the preparation of risottos and rice salads.

Vialone Nano Veronese rice: produced in the Veronese “low”, it is one of the most popular types of Italian semi-fine rice for the preparation of risotto.

Types of cooking and recipes with rice

The most common way to consume rice is after boiling it in water or cooked thanks to the ingredients of the chosen recipe, but there are also other methods to prepare it: just think of Asian biryani, that is fried rice to which cooked side dish ingredients are then added separately, or baked rice. Sauteed rice is the ideal method for recovering leftover yellow rice, brushing it in butter and crushing it in a pan until a crispy crust is obtained.

Due to its versatile nature, rice is therefore suitable for different types of dishes: not only for the most “famous” risotto such as the famous saffron risotto, the Milanese risotto or the seafood one, but also for traditional ones and for those accompanied by vegetables of all kinds (pumpkin, zucchini, mushrooms, broccoli, spinach), meat or fish. Rice is also the fundamental ingredient of timbales, supplì, arancini and rice salads and even desserts such as rice cream and rice cake. Finally, it is the protagonist of Japanese sushi (the variety used is specific for this type of preparation, short-grained and rich in starch, but can be replaced with Roma rice) and various dishes of Asian cuisine, from onigiri to rice with Cantonese rice curry.

Rice is one of the most nutritious cereals: 100 grams bring about 358 kcal and each grain is rich in fiber, vitamins and essential fatty acids. It is low in sodium, which makes it suitable for consumption by those suffering from high blood pressure, and is easily digestible: in fact it is often taken as a “light” dish after gastrointestinal complaints.

In addition, rice is rich in carbohydrates but, being gluten-free, it can be eaten by those suffering from celiac disease and replace pasta as a first course during main meals, especially with the addition to vegetables.