Instant yeast is yeast that has been dried and milled into a fine powder. It is used in baking as a levelling agent. It is most commonly sold in little small packets or sachets. Instant yeast dissolves and is activated quickly. Unlike fresh yeast and dried yeast, it doesn’t need to be proved before using, this means you can mix it straight into dried ingredients. Instant yeast is a very common ingredient and can be used recipes like bread and pizza dough.

Rapid rise yeast or quick rise yeast is made in the same way as instant yeast. They are both dried and milled into a fine powder.

The difference is that rapid rise yeast has additives that make the dough rise faster. This means you don’t have to let your dough rise and skip straight to shaping after kneading.

Per 100 grams of instant yeast, there are about 105 calories. It has very little fat, its low in sodium and contains no cholesterol. Yeast is naturally gluten-free, but it is important to check the packet as the manufacturing process can change that.

A good ratio to stick to is 7 grams of dried yeast to 500g of flour. You can use less dried yeast for a slower leavening. 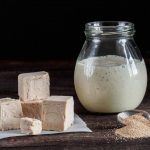 How to replace yeast 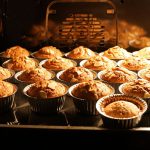 How to replace baking powder