Radicchio is a vegetable belonging to the chicory family, typical of the Treviso area in Italy, from which it owes its name approved by the denomination PGI, Treviso red radicchio. There are several varieties, which differ slightly in shape and flavor, but the dark red color of the streaks of the leaves remains constant, as well as the bitter note that distinguishes it.

The first is the most bitter, characterized by broad leaves, and its tufts are harvested in late summer, well before those of the late radicchio, whose seasonality is more distinctly autumn and winter. Both varieties are subjected to a process known as bleaching, necessary to achieve the right color and maturation, but the late radicchio is later picked and processed longer, so as to take on a bright color and, above all, a flavor. less bitter.

In the south of Veneto, however, the radicchio di Chioggia is cultivated, a particular cross between the late radicchio and the endive, which thanks to the selection made in the 1950s has taken on a rounded shape, while maintaining the purple color of the radicchio leaves red. It is a more bitter variety than the traditional one, and also more crunchy: this makes it ideal for cooking in the oven or in a pan while maintaining these properties, which instead tend to get lost in the case of long radicchio due to the significant loss of water which undergoes cooking.

Pairings and recipes with radicchio 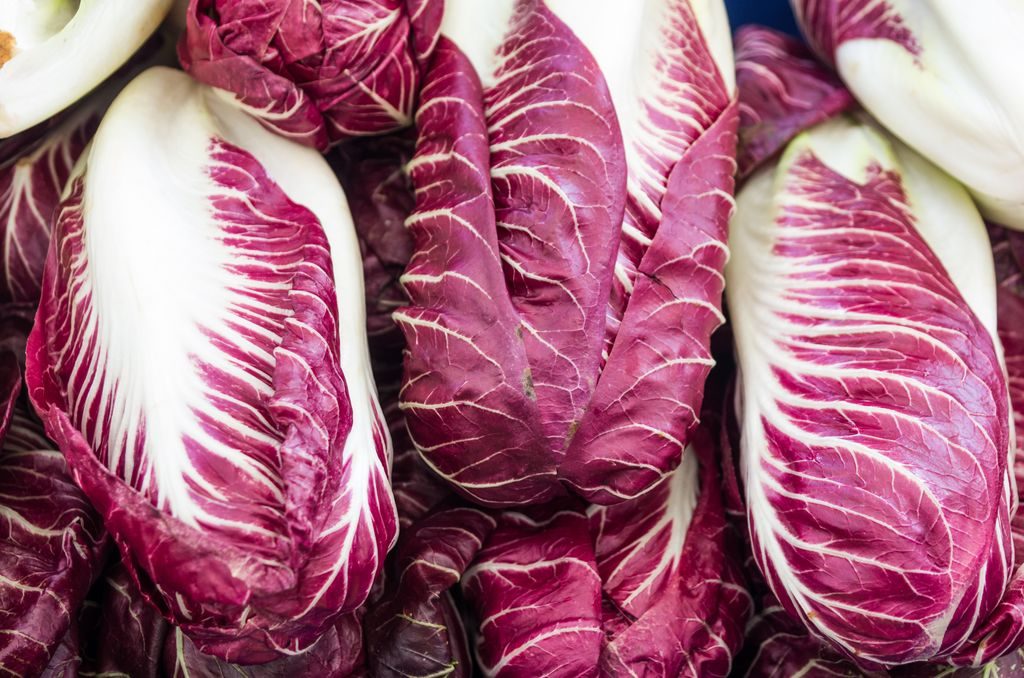 Radicchio is widely used in local Treviso cuisine but it is the protagonist of several dishes that are also widespread in the rest of the Italian territory, especially in the North. Among the most common combinations there are those with speck, sausage or walnuts, while a very interesting bittersweet contrast is created when the radicchio is accompanied by pine nuts and raisins, gorgonzola or other dairy products (just think of the cream and bechamel which are combined with it for first courses such as pasta or lasagna).

Finally, the radicchio lends itself well to cooking but also to be eaten raw as a side dish, as in the case of the crunchy salad of radicchio and oranges or of that radicchio, pears, walnuts and parmesan.

Radicchio has a low calorie content, about 23 calories per 100 grams, and is rich in vitamin A, vitamin B1, vitamin B2, calcium and iron, along with other antioxidant substances.

Thanks to the considerable presence of water and fiber, it is excellent for facilitating digestion: this is also due to the presence of bitter principles, the same used for the production of herbal teas and digestive liqueurs.